‘Bigg Boss’ fame Neha Pendse admits being in love; but NOT engaged!

Former Bigg Boss contestant Neha Pendse recently posted a picture with a mystery man on her Instagram page. In the picture, one can see the two holding their hands and sharing an eyelock.

While Neha shared just a heart-shaped emoji on her post, Shardul Singh Bayas, on the other hand, had announced his engagement and wrote, "Happily engaged." However, soon after people started sending congratulatory messages to the couple, Shardul changed the caption to "Happily in Love". Seems like, the couple want to keep their engagement under wraps.

Check out their posts: 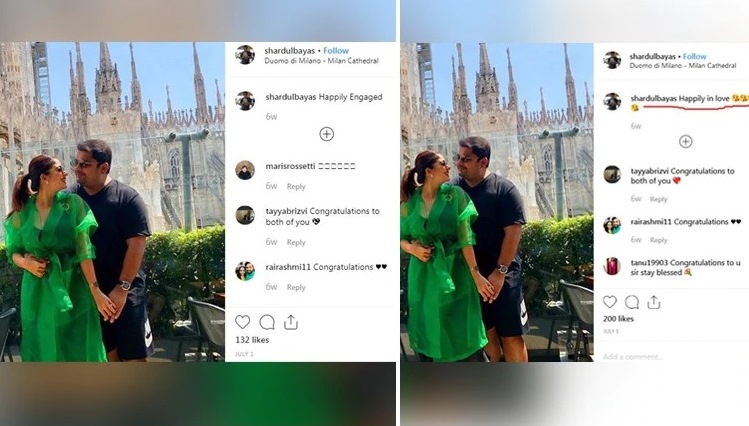 Confirming the same to a leading tabloid, Neha Pendse said, “Yes, I am in love, but I am not engaged. Shardul proposed to me and I said 'yes'. We plan to get engaged next year. We have been seeing each other for quite some time now. He is not from the industry."

On the work front, Neha is part of the glamour industry for more than two decades now. In 1995, she started her career as a child artist Doordarshan's Captain House. Later, she rose to fame with Hasratein, wherein she played Shefali Shah and Harsh Chhaya's daughter Urja. She was last seen in Kitchen Champion 5 in a guest appearance.

Been stuck here with four days' clothes: worried Mouni Roy stranded in for 2 months UAE due to COVID-19 lockdown

Exclusive: ‘I struggled for almost one hour to save them’ – RJ Pritam Singh on being brutally assaulted for rescuing a couple from eve-teasing

PeepingMoon Exclusive: Bollywood gives one a lot, but takes away a lot too, that life isn't for me : Krishna Shroff on not following father Jackie Shroff and brother Tiger Shroff's footsteps