Advertisement
HomeWEBCASTWatch: Akshay Kumar is on fire at the launch of his new Amazon Prime Video web-series The End

Watch: Akshay Kumar is on fire at the launch of his new Amazon Prime Video web-series The End 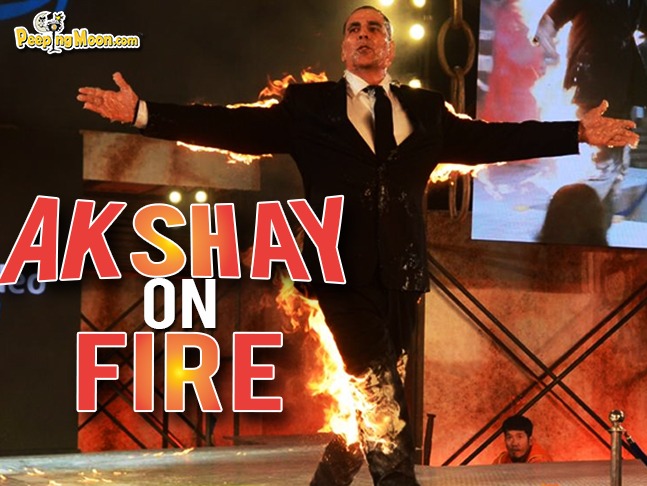 Akshay Kumar is one actor who is always on the move. He is gearing up for the release of his upcoming film Kesari and also unveiled the first poster of his cop-drama Sooryavanshi directed by Rohit Shetty today. However, now he is all set to make his digital debut in an original web series from Amazon Prime Video which is tentatively titled The End.

At the new series launch, Akshay proved why he is given the moniker ‘Khiladi Kumar’ by doing a live stunt with fire. Akshay who had made a name for himself in Bollywood with his martial arts and action skills before he proved his acting mettle in comedy and other genres, once again made the audience remember his daredevil attitude and his death-defying stunts in films. He literally set the stage on fire today at the launch of the web series. Akshay lit himself up and walked the stage at the launch that elicited a cry as well as awe from the audience. Watch him below.

The End will probably see Akshay take on his action star avatar once again after a considerable amount of time. Talking about the web series, Jennifer Salke, Head, Amazon Studios, said, “The scale at which THE END (working title) is being conceived is enormous and speaks of our passion for creating breakout programming across genres. The storyline and the action sequences have been brilliantly crafted to give viewers a thrilling experience. Our goal is to make Amazon Prime Video the powerhouse of talent, in front as well as behind the camera, and we are thrilled to have Akshay Kumar and Abundantia Entertainment anchoring the show for us. We will continue to bring distinctive, fresh and high-quality content to our audiences and we believe, our Prime members across the world are going to absolutely love the show.”