Amazon Prime Video's recently released web series Paatal Lok took the OTT platform by storm with its gritty, dark, and realistic content. After receiving accolades from across the industry, today Ranveer Singh posted a story on his social media recommending everyone to watch Paatal Lok, praising the show and congratulating the makers of Paatal Lok. For the unversed, Ranveer's ex and co-star of many films, Anushka Sharma is one of the key producers, headlining the successful show.

Ranveer posted a story with the poster of Paatal Lok with the caption, "STRAIGHT-UP SCORCHER. Kadak. @ anushkasharma & @kans26 unflinching conviction. Raised the bar, my friends. Congratulation to the stellar team!" 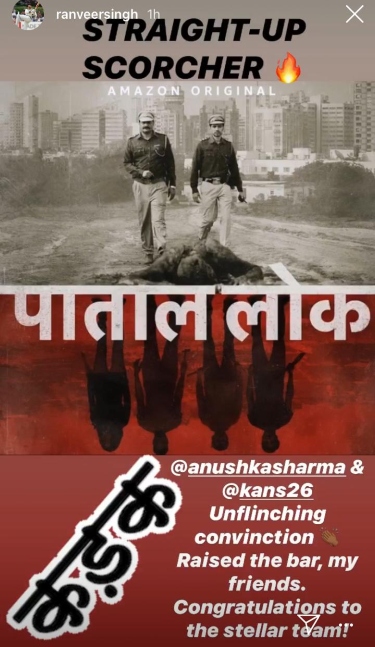 Recommended Read: Anushka Sharma is elated as she watches 'Pataal Lok' but it is her cool wedding caricature with Virat Kohli that has caught our attention!

The series also has the stellar ensemble cast of Neeraj Kabi as 'Sanjeev Mehra', Abhishek Banerjee as 'Hathoda Tyagi', Jagjeet Sandhu as 'Chaaku', Asif Khan as 'Kabir M'  and more. The neo-noir show is created by Sudip Sharma and produced under Clean Slate Films which is Anushka Sharma's banner.

SGPC demands ban on web series Grahan, based on anti-Sikh riots, for p