Advertisement
HomeWEBCASTAhead of Laxmii's release, director Raghava Lawrence thanks Akshay Kumar for being a part of the film, says 'normally actors don't accept such tough roles'

Ahead of Laxmii's release, director Raghava Lawrence thanks Akshay Kumar for being a part of the film, says 'normally actors don't accept such tough roles'

Ever since Akshay Kumar's comedy-horror Laxmii was announced, the excitement among cine enthusiasts and fans of the actor shot high. The official Hindi remake of the Tamil blockbuster Kanchana, Laxmii is directed by Raghava Lawrence who starred and helmed the original four-film franchise. The film also stars Kiara Advani as the female lead.

Now, as the film's team gears up for the big release this evening, director Raghava has shared a heartfelt thank you note for Akshay. Raghava took to Facebook and wrote, "Hi friends and fans. My Hindi debut direction movie Laxmi is releasing in #Disneyplushotstar at 7.05 pm today. Through Tamil movie Kanchana, I wanted to convey the pain and struggles of transgender’s and the movie received lot of appreciation from transgender’s community and the public. Similarly, When Akshay sir is acting in it’s Hindi remake, I hope the message will reach to wider audience. Normally actors won’t accept such tough roles but I believe Akshay sir being such a good human being he cares a lot for the society and previously he has given so many good message films. My special thanks to Akshay sir for accepting and doing this role and I’d like to extend my Thanks to sister shabina for the whole process of this film, tusshar sir , kiara Advani for acting beautifully, My DOP Vetri, my co-directors and to all technicians who worked for this film. I hope you all will see and enjoy the movie today at 7.05pm @akshaykumarofficial @KiaraAdvani #ShabinaKhan @TussharKapoorOfficial @foxstarhindi @DisneyPlusHotstarVIP" 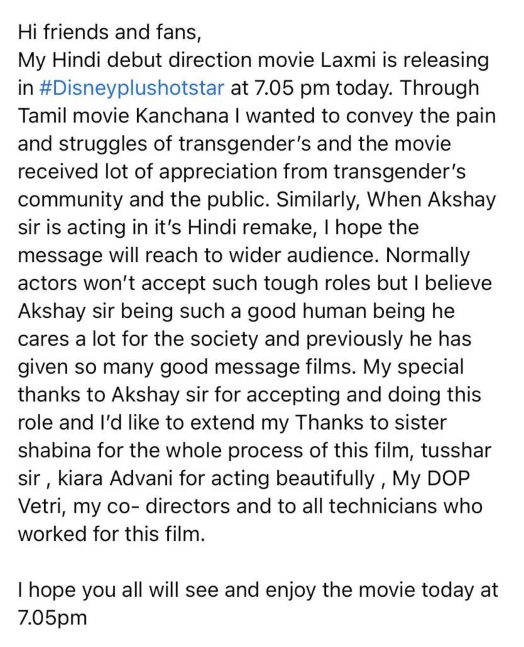 Transgender rights activist Laxmi Narayan Tripathi who was touched by the transgender representation in the film also praised it and said, “Any transgender is equal to any man or woman, which comes out from the film in a very strong way. I believe it is wonderful, and instead of criticism, we should appreciate Akshay ji for being such a strong man and doing such a strong film.”

Upset by the negativity surrounding the film, she added, “Some publications are opposing it, and putting up articles against it. How much do they know about reality? I am really shocked. What do you mean by that? There are many films I also acted in, nobody bought it, it’s a business. Without seeing a film, on the eve of its release, these articles are being written.”