The 48th International Emmy Awards this year saw quite a few Indian shows and actors getting nominations. Now, Netflix’s Delhi Crime has won the Best Drama Series award much to the delight of Indian fans. The series directed by Richie Mehta is based on the horrific 2012 Delhi gang-rape and murder that jolted the nation out of its reverie. Shefali Shah plays the role of Deputy Commissioner of Police investigating the crime. Besides, Shefali, the crime drama has a stellar cast that includes Adil Hussain, Denzil Smith, Rajesh Tailang, Jaya Bhattacharya and others.

However, Arjun Mathur who was nominated in the Best Actor category for his performance in Amazon Prime Video’s original Made In Heaven could not clinch the top prize. Billy Barratt won the award for Responsible Child. Amazon Prime Videos’ Four More Shots Please had also garnered a nomination in the Best Comedy Series but lost it to Ninguem Ta Olhando (Nobody’s Looking) whereas Glenda Jackson won Best Actress Award for Elizabeth Is Missing. 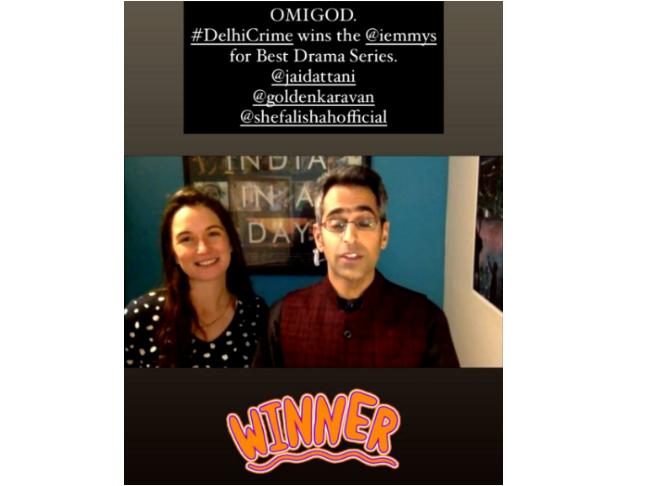 Due to the coronavirus pandemic, the awards were held virtually for the first time in the history of International Emmys. Richard Kind hosted the ceremony live from an empty theatre in New York City with no live audience and no celebs on the red carpet. Here’s the complete list of winners:

'Squid Game' director Hwang Dong-hyuk talks about plans of the 2nd season, says 'there are a lot of possibilities out there for season two storylines'

Hum Do Hamare Do: Kriti Sanon and Rajkummar Rao burn the dance floor in their latest song 'Bansuri'