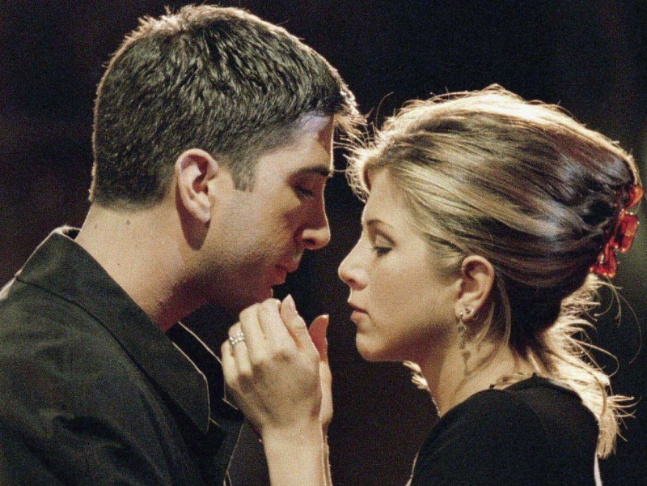 Friends: The Reunion that premiered on HBO Max on May 27, got the entire world talking. The six star cast of the popular show- David Schwimmer, Jennifer Aniston, Lisa Kudrow, Courteney Cox, Matthew Perry and Matt LeBlanc got together 17 years after the show ended in 2004 and brought the entire world to a standstill. People were overjoyed on looking at some behind-the-stage footage of their favourite characters- Ross Geller, Rachel Green, Monica Geller, Chandler Bing, Phoebe Buffay and Joey Tribbiani. After Jennifer and David confirmed that they had a crush on each other in the first season of Friends, the executive producers Marta Kauffman, David Crane and Kevin S.Bright were asked about their shocking revelation.

When quizzed if they knew about David and Jennifer's IRL almost romance, Kevin revealed, "It was a very hot topic on the set because the electricity between them in the scenes was like, 'Oh my God, they can't be acting that, there's got to be something!' Everybody was suspicious that something was going on. People made up their own rumours and at a certain point. But we all thought something might have been going on because they were just so good together. We were so invested in Ross and Rachel, like the rest of you. There was something about them. But like the show, in a certain way, you had to wait a long time and then it never happened. The happy ending is in the show.”

"so we just channeled all our love and adoration for each other through Ross and Rachel." - Jennifer Aniston, 2021

RECOMMENDED READ: Did the FRIENDS cast ever dated in real life? Matthew Perry and David Schwimmer come clean with the secret

Marta said, “It was pretty obvious. We didn’t know for sure because we never asked either of them, but yes, we thought that perhaps might be going on. It did not wind up inspiring (Ross and Rachel’s storyline) honestly at all. If anything, their ability to channel those feelings into Ross and Rachel just made the longing all the more relatable. On the other hand, David confessed that he was kind of unaware of the crush part and said, “I didn’t know! Of the three of us, I was on stage the least. I was always in the writers’ room, so there’s probably a lot of stuff that went on, on stage, that went by me. If it wasn’t about improving the story or punching up a joke, I probably missed it.”

When the trio were asked if they ever discussed the troubles that come when showmances don’t work out with Jennifer and Ross, Kevin said, “You’ve got to let these things take their course. You don’t want to get involved in actors’ personal lives, then you’re really in trouble as a producer. We never did because nobody saw anything, nobody found anything; it was just rumors that were all based on how good they were as actors.”

Courteney and Matt revealed during the reunion episode that the cast was very much aware of Jennifer’s and David’s crushes on the sets of Friends, as it was hard not to notice.