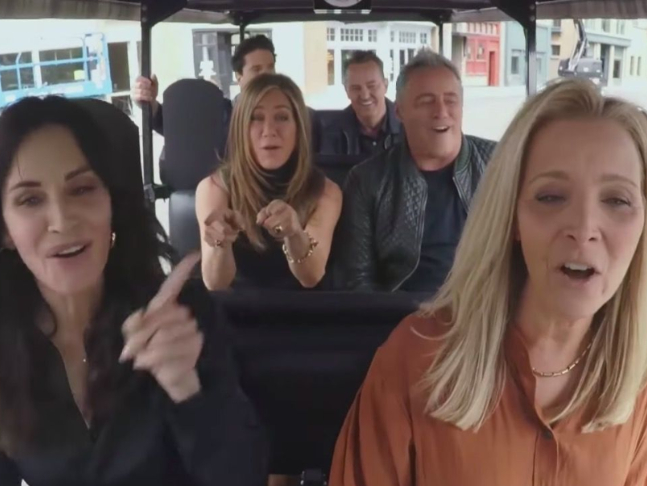 After getting the six stars of the ever-popular sitcom Friends for a special reunion episode for HBO Max, James Corden is teasing fans with another fun and yet iconic moment with the cast. On the recent episode of The Late Late Show with James Corden, the host’s famous Carpool Karaoke featured David Schwimmer, Matt LeBlanc, Jennifer Aniston, Lisa Kudrow, Matthew Perry and Courteney Cox.

The host released a 10-minute short video of the karaoke where the cast sings I’ll Be There For You, the hit title track sung by The Rembrandts. In the video, Corden drives a golf cart around the Warner Bros. studio where the sitcom was filmed and the cast sings along with the right amount of claps in the track. The clip is breaking the internet right now.

The cast of Friends do a little impromptu CART-pool Karaoke. pic.twitter.com/4bvF1TMoiS

RECOMMENDED READ: Courteney Cox does the dance ‘Routine’ from FRIENDS not with David Schwimmer but Ed Sheeran, breaks the internet with their moves

Corden hosted the reunion special which aired last month worldwide bringing back memories of the iconic show. The six lead actors came together for a special unscripted show which most fans are still talking about as well as several guest stars also made appearances on the episode.

The reunion episode of Friends is currently streaming on Zee5 in India.