Advertisement
HomeWEBCASTOver and Out! Sidharth Malhotra’s and Kiara Advani’s Shershaah promo to be out tomorrow, film to have a digital release on Amazon Prime Video

Over and Out! Sidharth Malhotra’s and Kiara Advani’s Shershaah promo to be out tomorrow, film to have a digital release on Amazon Prime Video

There is some good news for fans of Sidharth Malhotra and Kiara Advani as they have been anxiously waiting for their upcoming film Shershaah. Sidharth finally dropped a hint, sharing an update that the film’s promo will be released tomorrow on July 15, 2021 at 12:07 pm.

Kiara, producer Karan Johar and Amazon Prime Video also replied to Sidharth’s tweet sharing in a social media banter on the lines of how armymen communicate with each other during an ongoing war or an operation. Sidharth tweeted, “Shershaah to Delta - I have my eyes on target 150721. Waiting for your signal. OVER,” alluding to tomorrow’s date.

To this, KJo’s Dharma Productions replied with, “DELTA to @SidMalhotra. The signal code is 12:07. OVER,” giving the hint that the promo will be released at 12:07 pm tomorrow. Kiara expressed her excitement whereas KJo wrote, “time to report guys.” Amazon Prime Video gave an affirmation of the order with the tweet, “Aye Aye Captain.” 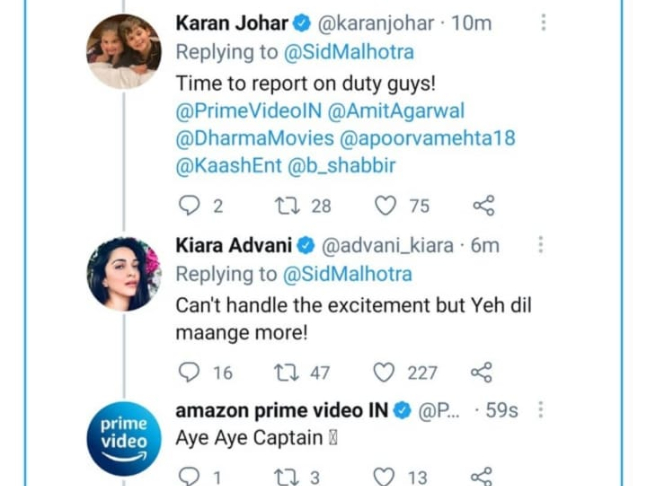 Shershaah is a biopic on Param Vir Chakra awardee and army captain Vikram Batra. The film sees Sidharth in a double role of both Captain Vikram Batra and his twin brother Vishal. The film is directed by Vishnu Varadhan and produced by KJo under his production banner Dharma Productions. Initially set for a theatrical release on July 3, 2020, the film was postponed due to the COVID-19 pandemic. Now it is all set to have a direct-to-digital release on Amazon Prime Video.