Advertisement
HomeWEBCASTAjay Devgn opens up about his relationship with father Veeru Devgan on 'Into The Wild With Bear Grylls', says 'sometimes it gets too late'

Into the wild with Bear Grylls, a discovery+ exclusive that has been one of the highly anticipated shows this October, is almost here to keep you at the edge of your seat! World renowned adventurist Bear Grylls will be seen joining hands with India's evergreen action hero, Ajay Devgn for an adventure packed journey. Tune-in for this nail-biting experience as the duo navigates through the high seas and explores a remote island in the Indian ocean amidst sharks and other hazards!

Select excerpts from the show:

Ajay said “Yeah, I've done a lot of stunts because when we started doing stunts in films, there were no harnesses. So, we had to jump from 30 or 40 feet. You had to land on boxes and most of the time you used to break our ankles or something or the other. No crash mats when you used to fall on the ground. So, we used to do the real stuff.”

They say you will never know until you go and so I did! Exploring the uninhabited Islands of the Indian Ocean with @BearGrylls yeh koi khel nahi hai bro! Here are glimpses of our unforgettable journey of #IntoTheWild premiering 22nd Oct @discoveryplusIN & 25th Oct @DiscoveryIN pic.twitter.com/KF5saNhOVZ

RECOMMENDED READ: 'Those we love don’t go away but walk beside us everyday,' says Ajay Devgn remembering late Veeru Devgan on Father's Day

Ajay speaking about his father “It is tough losing your parents. Because in the first 20 years of your life, you don't care for them. You think they are stupid. They don't know anything. You know everything. And by the time you have children you start realizing what a parent actually is or what they must have done. And sometimes it gets too late also.” He added “He was suffering from Alzheimer's and a lot of injuries because of the stunts. He had to go through glass once when he was young, and he had 45 stitches on his head because that time glass break was real glass break.” 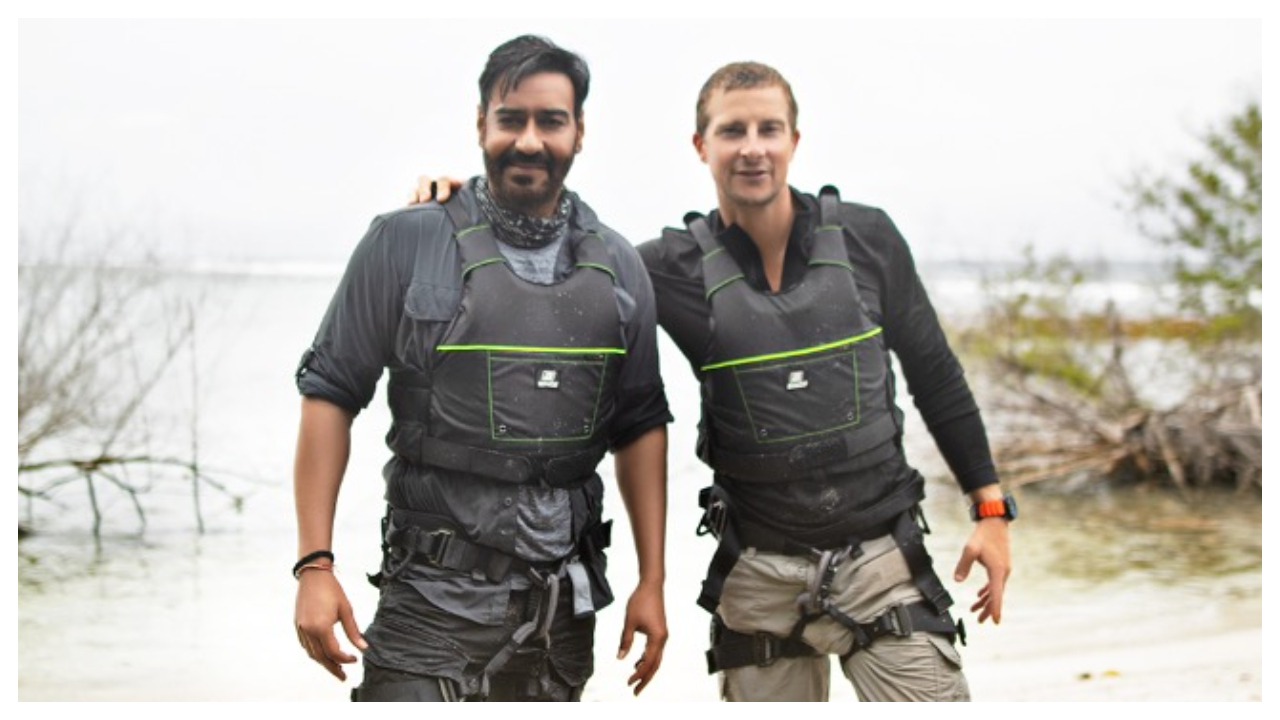 Ajay Devgn on Bear Grylls teaching him a survival technique

After a tiring journey crossing the ocean to reach the island, Bear and Ajay set out to find some much-needed nutrition for themselves. They find a scrap plastic container on the island with which Bear as always has an ingenious idea to catch fish with, he said “So the whole point of this is like we make a hole for the fish to go into. Then we'll stuff it full of palm fronds and branches. So... It's like a funnel so that the fish can go into it, but then it kinda gets stuck in it. So as long as there's a whole bunch of the leaves and ferns inside there, if we can get a fish to go in, they then won't be able to get out.  So, you want it easy for them to go in and hard to get out. It's almost like a funnel. for it to go in the middle there.” To make sure that they don’t go hungry, they add a few crabs in the container as bait. Ajay astonished by this technique said “I think maine kabhi socha bhi nahi tha ki main aisa kuch karunga life mein survival ke bhi kaafi cheezein seekhain ki agar aap kahin fas jaate ho yah na bhi phaste ho toh kisi bhi cheez ko uthakar kaise use kiya ja sakta hai. So, I think I'm very, very happy that I'm here.” 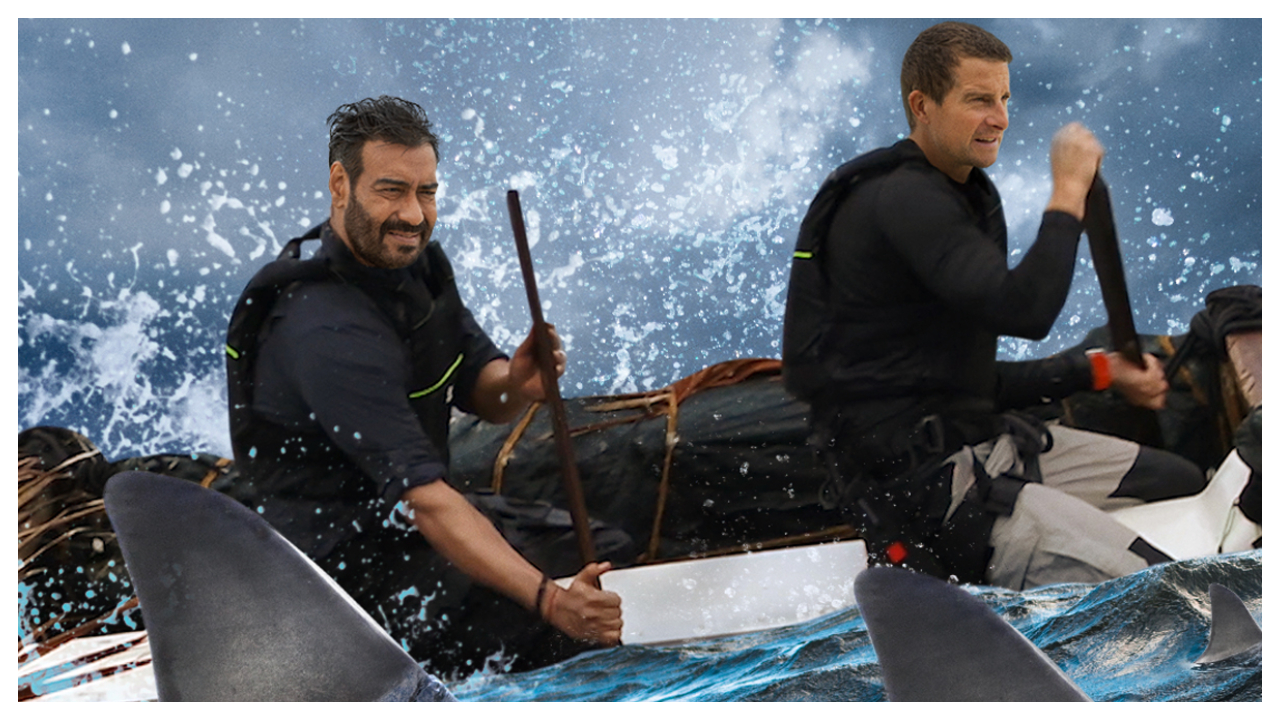 While venturing out into open sea, hoping to be spotted and rescued by local fishermen boats, Bear and Ajay make a raft with whatever they can salvage from the island. Upon completion of the raft Bear bestows the privilege upon Ajay to name the raft, Bear further asks him what his daughter's name is? To which Ajay replies ‘Nysa’ and without much thought they decide to name their rescue raft after Ajay's daughter!

Bollywood icons Kajol, Anil Kapoor and Rohit Shetty motivate and challenge Ajay for his expedition on 'Into the Wild with Bear Grylls'

Ajay’s loved ones have special messages for him which are shared by Bear Grylls at various stages of the show. The ones who motivate and wish him luck in the episode include Kajol, Anil Kapoor and Rohit Shetty.

Spilling the beans on unknown facts about Ajay Devgn, Kajol said “Let me start by saying that there are a few secrets that not everybody may know about Ajay. One of them being that he is a fabulous cook. And number two is that he is borderline OCD about touching anything with his fingers. According to him, it's because he just can't get the smell out of his fingers. Whatever that means! Anyway, so... My challenge to him is that he has to be made to touch and eat the smelliest, grossest, slimiest thing that you think of Bear and let me see if he lives up to it.”

The episode featuring the dynamic duo will exclusively premiere on 22nd October 2021 at 6 AM IST on Discovery+ and the broadcast premiere of the special is scheduled for 25th October 2021 at 8:00 PM across 14 linear channels.

Money Heist: Berlin gets a spin-off series to release in 2023; original show to have a Korean remake

Minnal Murali Bonus Trailer: Tovino Thomas uses his superhero to save the village from destruction