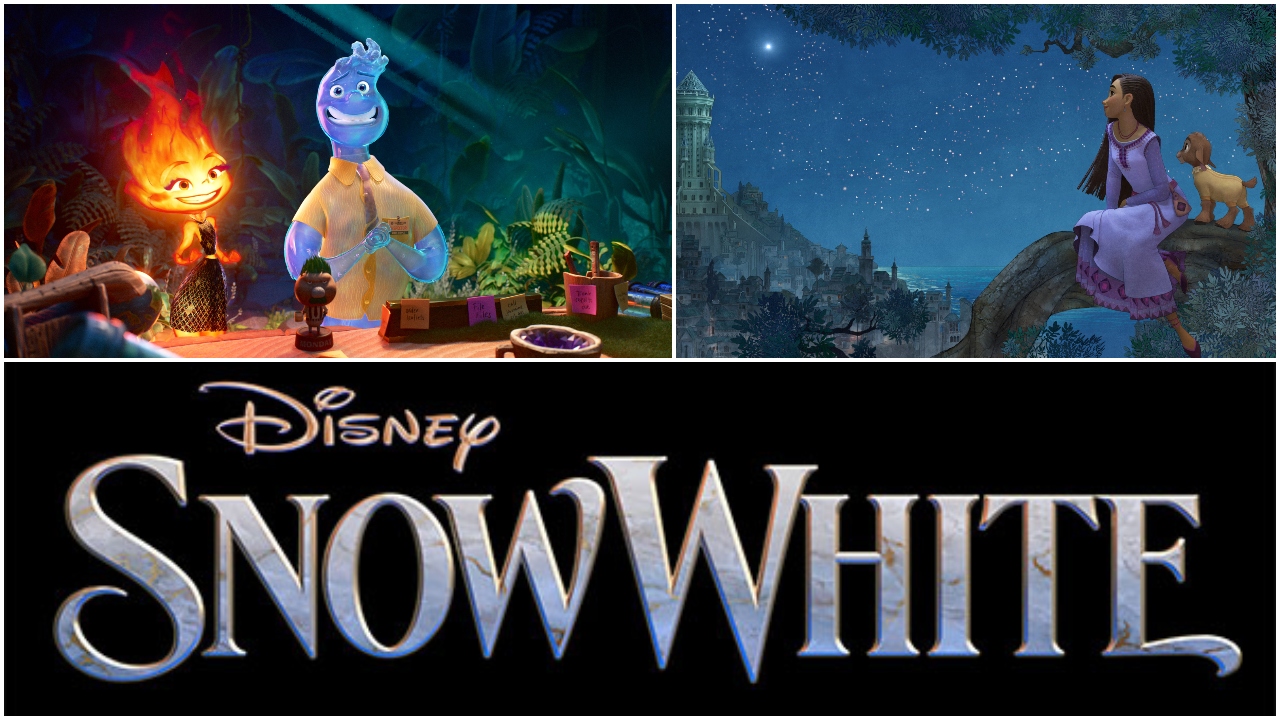 The Walt Disney Studios turned up the volume in Hall D23 at the Anaheim Convention Center today where thousands of fans gathered at D23 Expo 2022 to be the first to hear big announcements, new details and future plans for Disney Live Action, Pixar and Walt Disney Animation Studios. The showcase began in true Disney style with a look back at special moments in Studio history and Cynthia Erivo’s breathtaking performance of the classic Disney song “When You Wish Upon a Star” from Disney’s all-new live-action version of “Pinocchio,” now streaming on Disney+.

“What a way to kick off the show,” said Alan Bergman, chairman of The Walt Disney Studios. “Of course, ‘When You Wish Upon a Star’ was first heard in the animated film ‘Pinocchio’ in 1940. It’s a motto about dreaming big, dreaming the impossible and making those dreams come true. And that’s something we try to do each and every day at the studio.”

Fans in Hall D23 were among the first to see a brand-new logo introduction of the iconic Disney castle—now platinum in honor of Disney’s 100 Years of Wonder celebration. Created by Disney Studios and Industrial Light & Magic, and featuring an all-new arrangement of “When You Wish Upon a Star” by award-winning composer Christophe Beck (“Frozen,” “WandaVision”), the new Disney castle introduction will play in front of all Disney theatrical and streaming releases starting this fall.

Sean Bailey greeted excited fans with a nod to Erivo’s stunning performance and concluded his presentation with four highly anticipated titles heading to theatres in 2023 and 2024:

HAUNTED MANSION director Justin Simien—who actually used to work at Disneyland—joined Bailey to discuss the ghostly adventure. Inspired by the classic theme park attraction, “Haunted Mansion” is about a woman and her son who enlist a motley crew of so-called spiritual experts to help rid their home of supernatural squatters. They shared a sneak peek of the film exclusively with the D23 Expo crowd, then welcomed the queen of scary movies, Jamie Lee Curtis, who made an unforgettable entrance aboard a Haunted Mansion doom buggy. Curtis plays Madame Leota in the film, which releases next year. Title treatment and event imagery are available to download and share.

MUFASA: THE LION KING, a prequel to The Lion King, won’t release until 2024, but director Barry Jenkins was on hand to show a never-before-seen sneak peek and share a little about the film, which is currently in production. Told in flashbacks—Rafiki, Timon and Pumbaa tell the story of Mufasa to a young lion cub—“Mufasa” reveals the rise of one of the greatest kings of the Pride Lands.

SNOW WHITE is a live-action reimagining of the classic tale starring Rachel Zegler in the title role and Gal Gadot as Snow White’s Stepmother, The Queen. The film’s two stars joined Bailey to talk about their roles and to share a very early glimpse at the iconic characters in the 2024 film, which is directed by Marc Webb, produced by Marc Platt and features new songs by Tony®-, Grammy®- and Oscar®-winning songwriters Pasek and Paul.

Pixar’s Pete Docter was excited to share the upcoming slate for the Emeryville-based animation studio. “These last few years have been a time of great change in the world,” said Docter. “And it’s led us at Pixar to think about the future. Or, if I’m channeling my inner Joe from ‘Soul,’ I’d ask: ‘Why are we here? What’s our purpose?’ Well, for us, it’s to tell great animated stories. Whether those are theatrical feature films, streaming series or shorts, we think telling stories is foundational to who we are as people. They really define us. And we believe in the power of animation to capture and reflect the stories of our own lives.”

First up, filmmakers Peter Sohn and Denise Ream joined Docter on stage to discuss ELEMENTAL, an all-new, original feature film releasing on June 16, 2023. Sohn, who directs the film, shared the personal inspiration behind the film—a story of immigrants pursuing dreams in beautiful neighborhoods where language and cultures come together. Filmmakers introduced the characters in “Elemental,” which is set in a city where fire-, water-, land- and air-residents live together. Ember is a tough and fiery young woman, and Wade is a fun, sappy, go-with-the-flow guy. Helping bring them to life are Leah Lewis and Mamoudou Athie, who were warmly welcomed to the Hall D23 stage. Audience members got an exclusive look at the film and received a mini-poster featuring Ember and Wade.

Following flickering lights and an ominous message reading “Bring Us Your Leader,” Docter welcomed to the stage director Adrian Molina and producer Mary Alice Drumm to showcase for the first time ever plans for the original feature film ELIO. In the story, 11-year-old dreamer Elio is artistic, creative and an avid INdoorsman who finds it hard to fit in. Meanwhile, Mom Olga, who runs a top-secret military project, is working to decode a strange signal from outer space. But it’s Elio who makes contact, gets beamed into space and is subsequently mistaken for an intergalactic Ambassador for Earth. The voice of smart and super-confident Olga, America Ferrera, was invited on stage alongside Yonas Kibreab, who lends his voice to Elio himself. Kibreab revealed to the audience that “Elio” releases in Spring 2024.

Before Docter could wrap Pixar’s portion of the show, he heard a voice from inside his head. Fortunately, it was actually the voice of Joy, Amy Poehler, who arrived on stage to huge applause—especially when she informed the audience that INSIDE OUT 2 is in the works at Pixar. Director Kelsey Mann, producer Mark Nielsen and writer Meg LeFauve are hard at work on the all-new adventure inside the head of now-teenager Riley—who may or may not be feeling all kinds of new Emotions. “Inside Out 2,” the follow-up to 2015’s Oscar®- and Golden Globe®-winning feature film, is slated for release in Summer 2024.

Walt Disney Animation Studios’ Chief Creative Officer Jennifer Lee received a warm welcome from fans who were delighted to hear details about the studio’s plans for the yearlong 100-year anniversary celebration. “At Walt Disney Animation Studios, the studio that started it all, on the eve of our 100th anniversary, we see today as a moment of privilege and promise,” said Lee. “A privilege to be stewards of a studio and a dream that Walt and his brother, Roy, started a century ago. And a promise to continue to take risks in our storytelling—and to explore and expand and turn the possible into the actual, just as Walt did.”

Lee discussed the opportunities Disney+ has created at Disney Animation, reviewing the slate of shows heading to the streamer, including new series like ZOOTOPIA+, launching on Disney+ on Nov. 9. Fans saw a trailer for the new short-form series, which heads back to the fast-paced mammal metropolis, diving deeper into the lives of some of the Oscar®-winning feature film’s most intriguing residents.

Lee then set the tone for Disney Animation’s next feature film, introducing the filmmakers behind STRANGE WORLD. Director Don Hall and co-director/ screenwriter Qui Nguyen revealed their personal connections to the film that’s about an incredible family who must get past their differences to save a strange world full of danger and surprises. The audience was treated to an all-new trailer from Disney Animation’s 61st feature film before voice cast members Jake Gyllenhaal (Searcher Clade), Dennis Quaid (Jaeger Clade), Jaboukie Young-White (Ethan Clade) and Lucy Liu (Callisto Mal) joined the festivities. Fans also got a glimpse at an action-packed sequence from the film and received an exclusive poster. Produced by Roy Conli, “Strange World” also features the voice of Gabrielle Union (Meridian). The film opens in theatres on Nov. 23, 2022.

In the finale moment of the presentation, Lee returned to the stage to officially unveil Disney Animation’s next original feature film, WISH, set to release Fall 2023, during the Studio’s 100th year. A film that could only come from Walt Disney Animation Studios, the epic animated musical is inspired by the legacy of films from the studio and asks the question: “How did the wishing star, upon which so many characters wished, come to be?” Directors Chris Buck and Fawn Veerasunthorn outlined the story, which is set in Rosas, the kingdom of wishes where wishes can literally come true. Attendees were introduced to 17-year-old Asha—an optimist with a sharp wit who cares endlessly about her community. In a moment of desperation, Asha makes an impassioned plea to the stars, which is answered by a cosmic force, a little ball of boundless energy called Star. Together, they face the most formidable of foes to save her community and prove that when the will of one courageous human connects with the magic of the stars, wondrous things can happen. Disney Animation good-luck-charm Alan Tudyk joined filmmakers on stage to share an animation test for his newest character, a goat named Valentino. Buck, Veerasunthorn and Lee then introduced the voice of Asha, actress Ariana DeBose, who brought down the house singing an all-new original song written by Julia Michaels, who’s writing all of the songs for “Wish.” DeBose’s captivating performance of “More for Us” closed the showcase in signature Disney style. Lee is a writer on the film, Peter Del Vecho produces and Juan Pablo Reyes co-produces. Title treatment, concept art and event imagery are available to download and share.