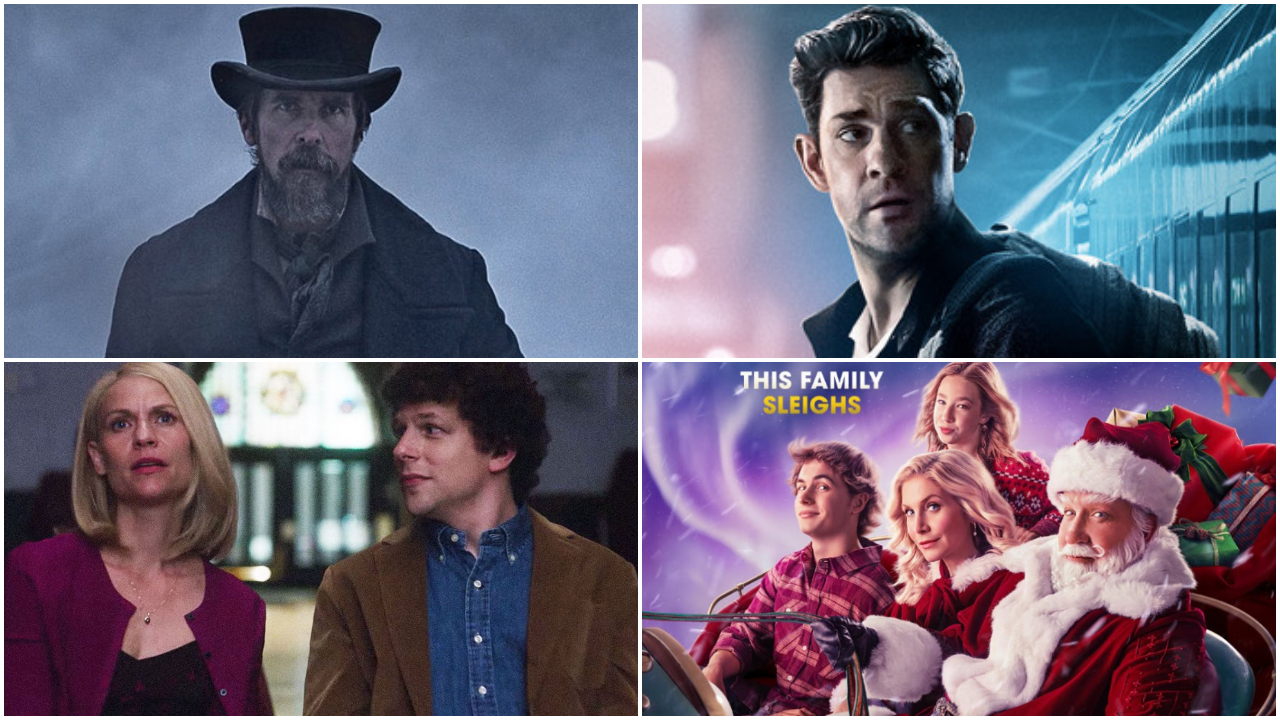 There are some extremely exciting shows and films premiering on OTT in the days to come and the trailers of them have been dropped online. Prime Video has released the trailer and key art for the highly anticipated return of Tom Clancy’s Jack Ryan starring John Krasinski in the titular role. Jesse Eisenberg and Claire Danes’ Fleishman Is In Trouble trailer also dropped and so did the trailer and key art for Tim Allen’s The Santa Clauses. Christian Bale delves deep into a chilling mystery in the trailer of The Pale Blue Eye.

Read on for more details:

Every heart tells a tale.

Based on Louis Bayard’s book of the same name, The Pale Blue Eye stars Christian Bale in the lead role. Set in 1830, the film shows Bale as Augustus Landor, a former police detective tasked to unravel the murder of a cadet at West Point. The murder takes on a sinister turn when it is found that the victim’s heart has been removed.

Facing a tight-lipped military that does not want to reveal its follies and secrets, Landor must turn to one of their own to solve the case. In this case, the man he must befriend abhors the military rigors and has a penchant for poetry and will be known to the world as Edgar Allan Poe. The Pale Blue Eye stars Harry Melling as Poe and is directed by Scott Cooper. Additional cast includes Gillian Anderson, Lucy Boynton, Charlotte Gainsbourg, Toby Jones, Harry Lawtey, Simon McBurney, Hadley Robinson, Timothy Spall and Robert Duvall.

In the third season of the action-thriller series, Jack Ryan is working as a CIA case officer in Rome, when he is tipped off that the Sokol Project, a secret plan to restore the Soviet Empire, is being resurrected more than 50 years after it was thought to have been shut down. Jack embarks on a mission to confirm the intelligence, but things quickly go awry, and he is wrongly implicated in a larger conspiracy. Accused of treason, with a Red Notice out for his arrest, Jack is forced to run from his own government, if he has any hope of uncovering the rogue faction before it’s too late. Crisscrossing Europe as he is hunted by former allies and new enemies alike, Jack races against the clock to stop the cascade of destabilizing conflicts from leading to global catastrophe.

Scott Calvin is back! After being Santa Claus for nearly thirty years, he’s as jolly as ever. But as Christmas declines in popularity, so does his Santa magic. Scott struggles to keep up with the demands of the job, as well as being there for his family. Upon discovering there is a way to retire from his post, Scott considers stepping down as Santa Claus and finding a worthy successor so that he can become a better father and husband.

The Disney Branded Television series is a production of 20th Television, a part of Disney Television Studios. The first two episodes of the six-episode series The Santa Clauses will premiere Wednesday, November 16, exclusively on Disney+ Hotstar.

Life. Marriage. And so much more.

FX’s Fleishman Is In Trouble streaming soon on #DisneyPlusHotstar. pic.twitter.com/PCA3Qv0F2D

FX’s Fleishman Is In Trouble, based on Taffy Brodesser-Akner’s best-selling novel, will soon be premiering exclusively on Disney+ Hotstar in India. The premiere will feature the first two episodes of the eight-episode series. A new episode will be available weekly. The trailer and key art were also revealed.

Fleishman Is In Trouble is the story of recently divorced 41-year-old ‘Toby Fleishman’ (Jesse Eisenberg), who dives into the brave new world of app-based dating with the kind of success he never had dating in his youth, before he got married at the tail end of medical school. But just at the start of his first summer of sexual freedom, his ex-wife, ‘Rachel’ (Claire Danes), disappears, leaving him with 11-year-old ‘Hannah’ (Meara Mahoney Gross) and 9-year-old ‘Solly’ (Maxim Swinton) and no hint of where she is or whether she plans to return. As he balances parenting, the return of old friends ‘Libby’ (Lizzy Caplan) and ‘Seth’ (Adam Brody), a potential promotion at the hospital that is a long time coming — and all the eligible women that Manhattan has to offer — he realizes that he’ll never be able to figure out what happened to ‘Rachel’ until he can finally face what happened to their marriage in the first place.

The series was created for television by Taffy Brodesser-Akner, who adapts from her acclaimed novel and executive produces alongside Sarah Timberman, Carl Beverly and Susannah Grant of Sage Lane Productions. Valerie Faris & Jonathan also executive produce as well as direct multiple episodes across the series. Fleishman Is In Trouble is produced by ABC Signature.