Bollywood is not done with the Kargil War, yet. But Sharan Sharma’s Gunjan Saxena: The Kargil Girl isn’t one of those historical war dramas that we had so much of (2003 had three) on the high-altitude mountainous warfare along the LoC in Kargil Valley between India and Pakistan in 1999. It is the engaging story of Flight Lieutenant Gunjan Saxena, a helicopter pilot in the Indian Air Force, who struggled for acceptance in the male-dominated defence force and then vindicated herself in action during the Kargil War.Janhvi Kapoor as Gunjan is credible. She’s soft and subdued throughout, suffering insult, injustice and injury after acing the physical, medical and intelligence tests to become an IAF helicopter pilot, then walks out of the Udhampur Air Force base at midnight in hopelessness to cry on Papa’s (Pankaj Tripathi) shoulder in Lucknow. But once the call for war is given, you see the steely glint in her eye as Gunjan in her flight suit slips into the Cheetah chopper that is combat ready for Kargil. Gunjan was determined to be a pilot ever since she was allowed into the cockpit on a commercial flight as a kid. There’s wonder in her eyes. But her brother (stoically played later by Angad Bedi, a solider in the Indian Army) who wants to grow up to be Kapil Dev tells Gunjan she is better suited to be an airhostess and girls cannot become pilots. Papa Pankaj is the voice of reason for Gunjan and among the many life lessons he gives her is this first one to settle the siblings’ dispute: “The person sitting in the cockpit is called a pilot – the aircraft does not know or care whether this is a man or woman.”The little girl, who wears Aviator sunglasses and plays with paper rockets and toy planes, grows up to be Janhvi as Gunjan. Her dream to be a pilot is now a passion. She wants to join the Delhi Flying School. Papa Pankaj is silently supportive. But Mama Saxena (Ayesha Raza Mishra) and brother Angad will not hear of it. Gunjan is set back five years as the qualification and fees for enrollment into the flying school get hiked up. The family cannot afford to send her. That’s when the IAF advertises for its First Batch of Women Pilots. Papa Pankaj innocently tells his wife, “Service to the nation is in our blood.” Angad, who is in the Indian Army, rebukes him saying the defence forces are not for women. “Is her security more important than her happiness?” he asks. 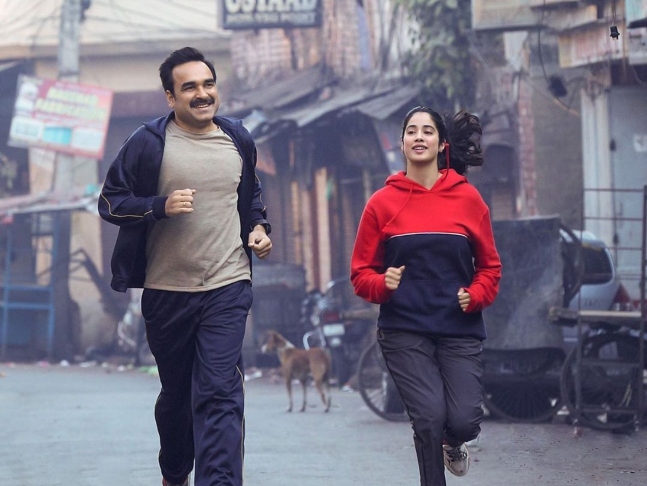 But – Gunjan makes it. The selection and trials, in which she is grittily compelled to show the IAF that she has the makings of a soldier, are nicely shown. She faces rejection on medical grounds for a temporary and permanent disability. Gunjan is overweight and a centimeter below acceptance height. But Papa Pankaj pulls her back from the brink of despair and trains her like Rocky to get into IAF Academy. She tells him, “The IAF wants patriots; I just want to fly. In chasing my dream I might be a traitor of the nation.” He replies, “The IAF does not want a pilot with josh shouting ‘Bharat Mata ki Jai’. You work hard, honestly and sincerely, and you will find you are a patriot.”The film is full of challenges and struggles that Gunjan Saxena really faced in the IAF as the testosterone-driven Udhampur base is forced to zip up and pull down pinups from the wall now that a lady officer was among their ranks. Our Kargil Girl finds there’s no women’s toilet because the IAF did not account for women there. So she does not know where to dress up in her flight suit and misses sorties. This kind of harassment goes on till in frustration Gunjan demands an explanation from her flight instructor. He puts her to an arm wrestling test which she loses. A teary Gunjan is told, “The enemy wants to see blood, not tears. Our duty is to guard the nation; not give you an opportunity to fly.” 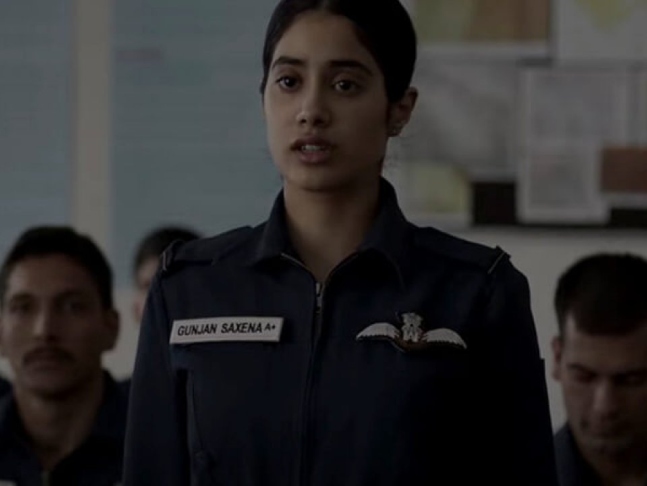 Gunjan quits and returns home. But she is summoned back because India is at war with Pakistan at Kargil. It’s direct conventional warfare between the two nuclear nations. And the IAF is tasked with supporting the Indian Army by flushing out Pakistani troops hidden along the LoC in Kargil. This is mountainous terrain and when the IAF is a man short Gunjan is called out to fly a Cheetah helicopter on a rescue mission in hostile enemy territory. Here is where her passion, her training, her father’s philosophies come to mind and Gunjan saves the mission, saves her superior officer, and wins the day with flying colours.The only fault I can find in Gunjan Saxena: The Kargil Girl, that is 1 hour and 52 minutes, is there’s only one piece of action. So what – Tom Cruise’s Top Gun too had just one skirmish in the skies. But the real Gunjan Saxena, who was 24 during the Kargil War, flew 40 missions to evacuate injured, transport supplies and assist in surveillance. Janhvi Kapoor carries the film (it’s only her second) on her slender shoulders just by controlled emotions. The role does not call for terrific acting, for makeup and costumes, there are no songs and dances for her, she’s a soldier at war and that’s what Janhvi sets out to be. That Flight Lieutenant Gunjan Saxena whose heroic story might have gone unnoticed but for the film was impressed, must be the finest tribute to Janhvi’s performance. 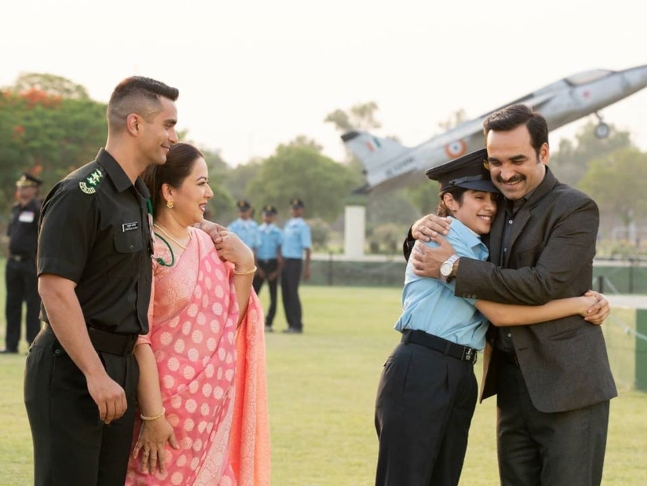 There are limited roles for the other players but Pankaj Tripathi is excellent as is Manav Vij who plays a grizzled IAF veteran and stands rock-like beside Gunjan when all the other officers are against her. Angad Bedi and Ayesha Raza Mishra provide subtle but strong support. Vineet Kumar Singh, as an officer who unknowingly brings out the best in Gunjan by challenging her on many levels, commands attention in his brief part. Songs by Arjit Singh, Sukhwinder Singh, Rekha Bhardwaj and Armaan Malik are not really the inspiring kind but the camerawork by R. Dee is breathtaking and you’ve got to fasten your seatbelt and get ready for the ride of your life as Gunjan Saxena takes you with blazing guns zigzagging over the rivers and between the mountains of Kargil Valley.