Advertisement
HomeWEBCASTWebcast ReviewsSardar Ka Grandson Review: 'Home is Coming' for Neena Gupta as Arjun Kapoor transcends borders for the love of his grandmother

Family-dramas have been an integral part of Bollywood. Adding on to the list is Kaashvie Nair's Sardar Ka Grandson which comes across as a heartwarming film, something not seen much in today's times. With a stellar ensemble cast of Arjun Kapoor, Rakul Preet Singh, Neena Gupta, John Abraham & Aditi Rao Hydari, the film is the amalgamation of two interesting themes - structural relocation and nostalgia. Sardar Ka Grandson, as the name suggests, is all about the love a family shares and how memories are sometimes all one needs to live their lives to the fullest.

The story of Kaashvie's film is unique. The 2 hours 20 minutes long film begins with Amreek (Arjun Kapoor) and his fiancée Radha (Rakul Preet Singh) running a movers and packers business in the USA called Gently Gently. But soon their relationship hits a roadblock due to Amreek's lack of emotional connection. As they part ways, Amreek is called back to his hometown Amritsar to fulfill his grandmother Rupinder Kaur's only wish. Rupinder, whom everyone lovingly refers to as 'Sardar' (Neena Gupta), desires to visit her ancestral home in Lahore, Pakistan, one last time, which she built with her late husband before the partition. Recommended Read: It's a love story between Sardar and grandson- Neena Gupta and Arjun Kapoor

Sardar keeps reminiscing her young days (played by Aditi Rao Hydari) with her husband Sardarji (John Abraham). She holds on to all the good and bad memories of her time spent in that home. But when Amreek is denied permission to travel to Lahore with Sardar, he decides to take the matter into his own hands, quite literally! He decides to move the ancestral home to Amritsar with the structural relocation technique. What happens next is a series of some emotional and some queer moments that make Sardar Ka Grandson accomplish his mission as he transcends borders for the love of his grandmother.

At times, the film might look bizarre to the audience with structural relocation being a unique concept but it does exist in several parts of the world. Adding a hearty touch, the film seems to be a decent watch in these grim times when all everyone needs is a few moments of laughter, together as a family. What works the most for the film, however, is the raw and real emotions that it shows through a loving grandmother-son relationship. 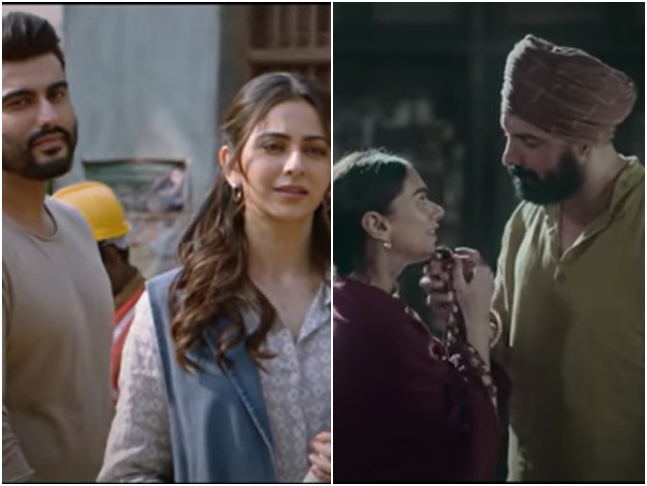 The performances are A1. What else can one expect when the cast includes Neena Ji and her ever charming presence. As a 90-year-old nonagenarian, Neena Gupta goes through a tough transformation, that sometimes took 10 rounds of trial before shoot. Kudos to her prosthetics artist. And it all seemed worth it with wheelchair-bound Neena rocking that 90-year-old look with her undeniable class with a whiskey potli attached to her wheelchair, at all times. Her look is as desi as it gets with colouful clips that she adorns with suits and shawls. As a typical Punjabi dadi, Neena exudes emotions and gives a heartfelt touch to the film. Her dialect is on point with a Punjabi touch, that comes naturally to her. 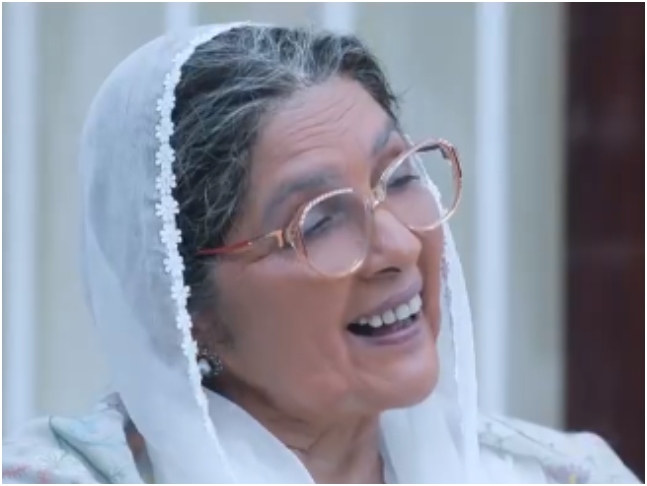 Arjun gives a calm and soothing performance as Amreek. In the film, he is sensible, smart but most of all - he is sensitive towards his grandmother's last wish. What might irk some of you is his Punjabi tone that comes across as unnatural, at times. But with right attitude and dedication, Arjun delivers a great performance, overall. Rakul does her job well of offering emotional and mental support to her partner in the film. However, her role doesn't have much depth to it. Aditi Rao Hydari and John Abraham, who play the young Neena Gupta and her late husband, bring in the old-world charm of romance. Even with less screen space, the two manage to take the audience perfectly into their small and sweet world. The supporting cast - Soni Razdan, Kanwaljit Singh and Kumud Mishra - does full justice to their roles. But the variety of Punjabi that's offered by every actor is, at times, cringeworthy.

Kaashvie Nair's direction could have been near-perfect if it wasn't for the timing. The film seems to lose its emotional value and ebullient touch because of the length of the film. Some parts seem repetitive and unnecessary due to the duration. The story, written by Anuja Chauhan, Amitosh Nagpal and Kaashvie, offers something fresh and unique to the platter. Hats off to cinematographer Mahedra Shetty, who captures the essence of Punjab and Lahore with realism. Maahir Zaveri's editing, however, could have been to the point, to avoid parts of boredom in between. Music by Tanishk Bagchi is incredible and matches the tone of the film.

Watch Sardar Ka Grandson to witness a moving story of an affectionate family because it's not homecoming, it's 'Home is coming'!

Never Have I Ever Season 2 Review: Maitreyi Ramakrishnan returns with

Shaadisthan Review: Kirti Kulhari’s and Nivedita Bhattacharya’s film ends up being a boring sermon due to a weak script