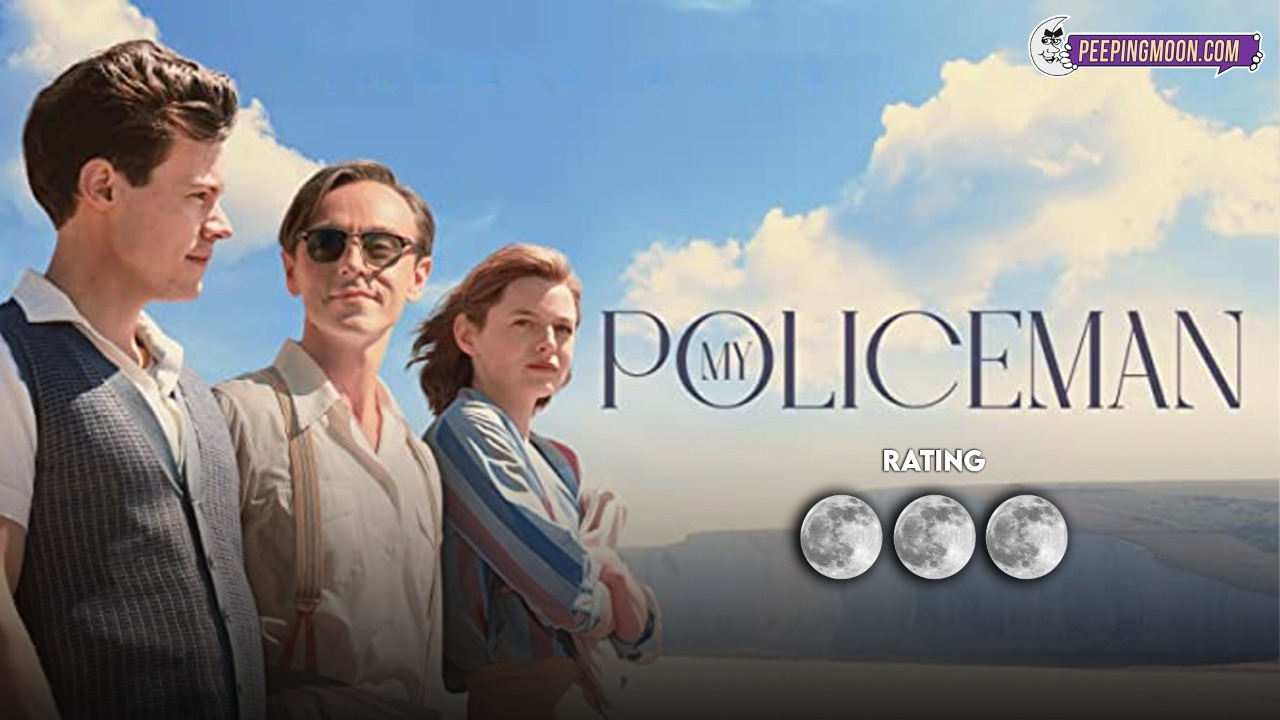 Rating: 3 Moons
Michael Grandage’s romantic drama My Policeman is based on Bethan Roberts’ best-selling novel of the same name published in 2012. The novel is loosely based on the real-life love triangle of author EM Forster’s relationship with a married police officer and the effect it takes on the man’s marriage and his unsuspecting wife. However, her book as well as the film brings out the brutalities and the shocking hatred directed towards homosexuals in the 1950s when if people were ‘outed’ they could end up in prison in Britain. The film functions somewhat like a history lesson that tells us to not repeat the mistakes of the past and overcome the prejudice meted out towards LGBTQIA community.

My Policeman is headlined by Harry Styles (as Tom, the policeman), his wife Emma Corrin (as Marion) and his museum curator lover, David Dawson (as Patrick). The story opens in a sleepy seaside town in the 1990s, where and older Marion (played by Gina McKee) is preparing room to receive a bedridden patient into her home and become his carer despite objections from her husband, Tom (Linus Roache). The invalid turns out to be Patrick (played by Rupert Everett) who has had a stroke and is incapable of speech but expresses a lot of anger and a craving for cigarettes. His inclusion in the lives of Tom and Marion seems mysterious especially when Tom absolutely abhors his presence in the house and does not want to have to do anything with him. To get an upper hand at the situation, Tom furiously walks his dog and stays away from the house as much as possible.

The conflicting situation has its seeds sown in the past and soon the film takes us to sunny and colourful Brighton of 1950s after Marion finds Patrick’s personal diary. My Policeman shows the young Marion (Emma) being besotted by the handsome Tom (Harry) and being courted by him but not with complete abandon instead always making her question whether he likes her or not? However, the courtship soon ends in marriage but Marion realizes that there is more than just friendship between Tom and Patrick as the latter becomes a huge part of their lives.

When the older Marion finds Patrick’s diaries in his personal belongings, her suspicions that he and Tom were indeed in love gets confirmed. We also get to see some aesthetically shot sex scenes between the two leading younger men but here is also where the film starts to get undone especially from the acting view point.

Harry Styles as the main protagonist fails to create an impact with his performance. He gets overshadowed by Dawson’s superior acting skills and falters when he has to express repressed emotions that come out in outburst. His portrayal neither has the bite nor the conviction needed to portray My Policeman as a poignant, sensitive, passionate love story. He appears wooden and insensitive in his portrayal of a gay closeted man, afraid of coming out to the establishment who might not only relieve him from the police force but also imprison him.

Emma also falters as the subdued, timid character and does not add much spark to the tale. The film fails to connect the characteristics between the younger and the older protagonists as the narrative is slow, laborious and devoid of a lot of dialogues. Roache doesn’t get to do much other than the dog walking that shows his frustration. On the other hand, Everett has no dialogues due to his inability to talk in the film and McKee tried hard to bring to life a character that is upright and loving but her thoughtful role becomes somewhat dull. Still McKee and Dawson give the film’s best performances.

Ron Nyswaner’s writing is not fluid and is jumpy with enough speed breakers in between.  His adaptation of the novel makes the film slow and dreary. Michael Grandage, who is well-known for his theatre work gets off a shaky start and only manages to hold onto the reins in the second half. However, by then you’re almost done with the film. Despite the weak performances, My Policeman still manages to be a worthy story especially when seen from the point-of-view of the unrelenting and forbidding attitude of society towards homosexuals and how this ruin several people’s lives. My Policeman could have been a great film given its premise and the life-and-times it portrays but it falls short of truly creating an impact.